Owner & Chief Repair Tech, Andy Bree, is a Philadelphia-based music professional. Born in New York City, and raised in the Philly suburbs, he has called the city-proper home since 2006.

At 32, Andy has spent 20 years on the guitar, 15 of those professionally, as guitarist for Philadelphia's Swift Technique 2007-early 2019, and most recently as tour manager/guitar tech for guitarist Paul Gilbert on his 2019 international tour.

In October 2016, he opened Big Sound Guitar Repair at the city-block-sized Bok Building, a former technical high school in South Philadelphia that is now home to some of the city's most stellar business owners and creators.

Andy considers himself a guitar player first, and a human second.

University of the Arts , Philadelphia, PA 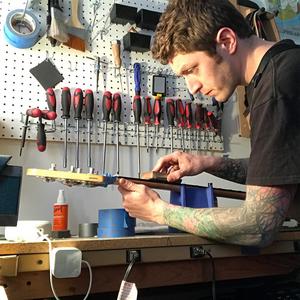